The Pacific Southwest Railway Museum, located at 750 Depot Street in Campo, California, is about an hour east from San Diego. This off the beaten track museum is a must-see destination for railroad enthusiasts and for families seeking a memorable day trip. Take a scenic ride in a historic refurbished train car through the mountains and desert.

History of the Museum 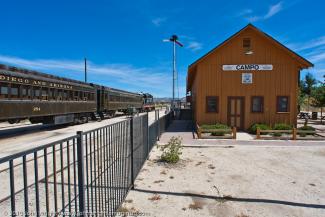 The Pacific Southwest Railway Museum (PSRM) is a non-profit that was started as the Railway Historical Society of San Diego by Eric Sanders and Douglas Duncan in an effort to preserve the San Diego Electric Railway streetcar system that was being dismantled in 1949. By 1964, the organization formally incorporated as the Southwest Railway Museum Association and they began to solicit donations of locomotives, railcars and other historic exhibits to realize their goal of creating a museum where visitors could look at vintage trains in various stages of restoration and go for a ride as well.

Growth of the Collection

By 1977, the collection had grown to include a retired wooden business car and steam locomotive from the Southern Pacific Railroad that operated from 1907-1919, the former Santa Maria Valley Railroad (Central California) 12-passenger gasoline railbus No. 9, a saddle-tank 6-wheeled steam locomotive No. 3 retired in 1923 from Mojave Northern Railroad, the "Shay" logging locomotive No. 3, and the former 1941 outside-braced Akron, Canton & Youngstown Railroad wood boxcar No. 3024.

In 1978, they acquired the remains of the former San Diego & Southeastern Railway wooden La Mesa, California railway station. Volunteers restored this 1894 gem to its 1915 appearance as a public museum.

In 1980, the museum was forced to relocate to Campo. This new location was perfect because of the surrounding scenic terrain and the proximity of railroad tracks, as well as the fact that it is only 50 miles east of downtown San Diego on State Route 94.

In 1983, the restored La Mesa depot was opened to the public as a museum. As the museum continued to develop in its new home, volunteers were busy salvaging tons of original historic material from the former SD & AE Yard Office before it was demolished. The collection continued to grow to include steam and diesel locomotives, Pullman-built electric commuter coaches, a chair car and many other items.

In 1987, the museum's first passenger train ran from Campo to Tecate, Mexico, making it the first and only non-profit operating railway museum to operate its trains across an international boundary.

Unfortunately due to a tunnel collapse in mid-2009, the Desert Line service was indefinitely suspended. According to a September 2017 report, the Desert Line is slated to be restored, so service can be re-established. For updates on the progress of this line, visit the BJRR website.

Today at the Museum

With the help of the California legislature, a new building was erected at Campo to house the growing collection. In addition to an extensive library, special events, walk through trains and displays of railroad memorabilia, the museum offers a variety of vintage train rides throughout the year and special hands-on programs like Engineer for an Hour. 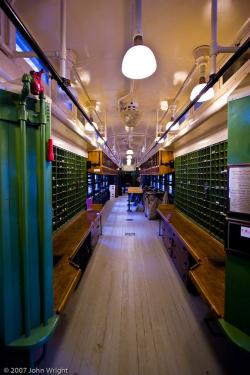 The mission of this living history museum is to preserve the historical, social, economic and technical impact of rail transportation with a special emphasis on the railroads of San Diego County in addition to the railroad systems that connect it with those in Mexico and other states and cities in the US. The focus of the collections strive to educate and entertain the widest possible audience about railroad heritage.

The library offers a large selection of private railroad documents and railroad related books. The collection includes 9,000 volumes in a myriad of subjects from engineering and catalogues to technical works and journals of historic societies. In addition, railroad researchers and enthusiasts will find a selection of official railway guides from 1900 to the present, magazines from the 1890 to the present, records, maps, blueprints, timetables, registers, railroad art and assorted ephemera from a wide variety of sources.

The train roster found on the museum's website details the types of trains owned and displayed at the museum. The online roster includes details on steam locomotives, diesel locomotives, cabooses, freight cars, passenger cars and support equipment like rail cranes, a turntable and a motorcar. In the museum building, you will find four trains to walk through along with detailed historic information. Outside there are even more trains to explore, but be careful of wasps. There is also a chronological history of the San Diego railroad at the station as well. 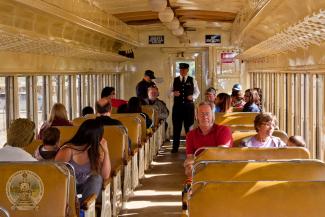 The operating hours of the Pacific Southwest Railroad Museum vary based on the season, so check the website to verify hours and special excursions. Train ride options range in pricing depending on the duration and the type of excursion chosen. The train exhibition on the grounds is free and open 24 hours a day. The Depot and Docent tours take place on Saturdays from 1 p.m. to 4 p.m.

If you have always wanted to ride in the locomotive cab with the engineer and crew, book a special "cab" ride ticket to experience what it is like behind the scenes. There are only two people allowed in the cab at one time and the most any train ride can accommodate in one trip is four people, two in the cab on the departure from the depot and two on the return trip. Cab riders must be six years or older and those under 18 must be accompanied by a paid cab rider over 18. Cab riders must wear closed-toed shoes. It is best to check the calendar to see which excursions offer cab rides and to book them early.

This one-hour, 12-mile round-trip rail ride on the historic San Diego & Arizona Railway operates on weekends between Campo and Division. Along the way, passengers will enjoy the rugged surrounding countryside as the train travels toward the Mexican border, crosses the Campo Creek Viaduct and enters into International Tunnel #4. If you are lucky, you may even be able to ride in the cab and blow the train whistle! The best views on this trip are on the end of the train and at the open door box car. Another highlight of this ride is the chance to see the U.S./Mexico border fence.

This 30-minute ride on the Missouri Pacific Caboose #13936 connects the Pacific Southwest Railway Museum's Display Building and the Campo Depot with the Mountain Empire Historical Society's Gaskill Brothers Stone Store Museum located in the mountain desert back country of the San Diego County Park system. The exhibit halls of the Stone Store Museum contains exhibits of Kumeyaay artifacts, a pioneer display dating from the 1800s, a military display and a bookstore.

This ride, that runs every 30 minutes from 11 a.m. to noon and from 1:30 p.m. to 3:30 p.m., is a perfect way for passengers to take in some desert scenery, tour the museum grounds by rail and explore the Gaskill Brothers Stone Store Museum. Valley Flyer tickets are free for infants and toddlers including those under three held in an adult's lap, $7 for children ages 3 to 12, and adults ages 13 and up are $14. To ride with the engineer in the locomotive, ages six and up is $25 each.

Engineer for an Hour

At special times during the year, the Pacific Southwest Railroad Museum offers the chance for individuals to operate a vintage diesel locomotive with one of the San Diego and Arizona Railway's qualified engineers. Sound the horn, ring the bell, feel the power of a real diesel locomotive as you inch up the throttle and then bring this iron beast to a stop using the train's air brake system. One of two trains is usually used-the Southern Pacific GP9 #3873 or the San Diego & Arizona #7285-and reservations are required.

If you want to book a memorable private event experience for your group, family, friends or business associates, the museum rents two private luxury cars, the pullman Robert Perry and Santa Fe Cafe-Lounge #1509, as well as the Missouri Pacific Caboose #13936.

Most reviews on TripAdvisor note that this destination is well worth the visit. Out of over 20 reviews on TripAdvisor, nearly all were "excellent" or "very good" with comments such as "amazing trains from the past," "great museum, great train ride" and "so worth the drive." Seasonal special event trains were also highly rated with comments like "fun on the pumpkin express" and "fun with the Bunny."

Although there is no Groupon voucher available as of this writing, hundreds of Groupon users recommended the Pacific Southwest Railroad Museum. The overwhelming majority of Yelp.com reviews are also positive. Several reviews recommended the Limited Polar Express as good family fun.

Know Before You Go

Keep these helpful insider tips in mind to optimize your time at the museum and to avoid disappointment.

Regardless of whether you are a railroad enthusiast, lover of history or looking for a family fun adventure, your visit to this historic gem is sure to entertain. The highlight of the day is to ride the rails through the rugged scenic backcountry hills of San Diego County on a vintage railroad car and imagine what life was like when these railroad cars were in their heyday.