Slab City is likely not a destination you're familiar with in California. If you're looking for a great, off-the-beaten-path roadside attraction, though, it should definitely be on your radar.

What Is Slab City?

Slab City is located in Imperial County, just over 150 miles northeast of San Diego. It's not actually a city at all. Slab City lies in the Sonoran Desert and is part of the California Badlands. Every winter, several thousand campers hang out here before heading north to cooler weather. During the summer months, temperatures can reach up to 120 F. It's said that a dedicated group of around 150 residents tough out the harsh conditions year-round.

Don't expect to find five-star accommodations here as most people here are considered "squatters," seeing how there is no electricity or other services. Often referred to as "slabbers," they may derive their living from government programs or retirement funds, or they moved here because they are poor.

History of the Area 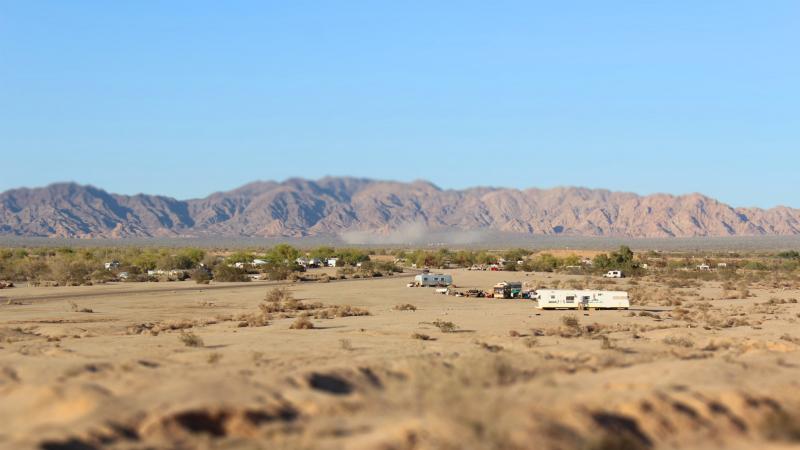 The land was deeded to the State of California in 1961 by the Department of Defense as it was determined that the land was no longer needed. There were no restrictions or restoration provisions noted.

1965 saw the first campers move into the region after they were ordered to leave a site near Mecca at Painted Canyon. Some moved on to Bombay Beach while others came to what is now referred to as Slab City. The "housing" types vary-everything from trailers to cardboard and plywood shacks to school buses and other vehicles.

Today, most people know the interesting 650-acre spot as the last free place in America, and it's what brings tourists to the area. However, free comes with a price in theory. You won't find electricity, water, or sewage pickup. With a lack of garbage pickup as well, you will notice there is trash pretty well everywhere.

What You Can Expect

Aside from the interesting cement slabs and few hundred residents, you'll find a church and even an 18-hole golf course, which has no grass-it's in a desert, after all. There is the Lizard Library, where campers and residents can borrow, donate, or trade books and magazines.

Want to dance the night away? There is a "nightclub" called The Range, which was set up by a local resident. Technically, it's just a stage between two old buses, but it has seats from old cars, buses, and theaters. Look for open mic night and other scheduled entertainment.

There is also a hostel of sorts, the Slab City Hostel, founded by an international traveler who wanted that hostel vibe with lots of interesting people from all over the globe.

And if you hit the timing just right, you might even be in town for the annual Slab City prom, complete with a new prom king and queen.

There are several attractions of note in and around Slab City. These include the following. 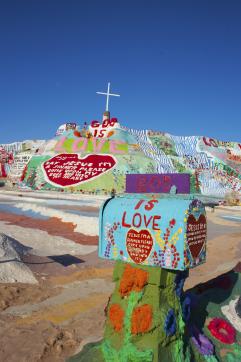 If you're looking for other attractions nearby to combine in a visit, don't miss the following. 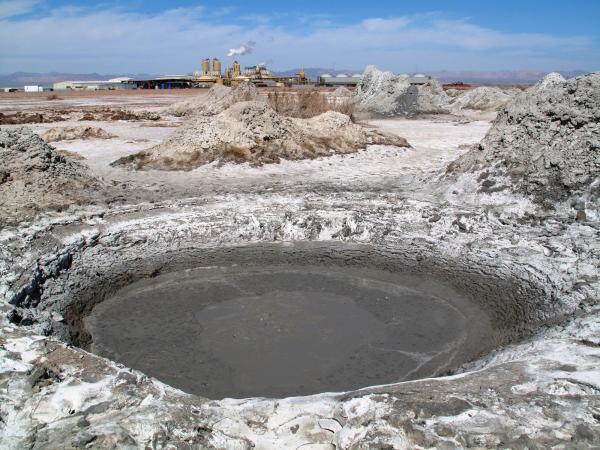 Looking to the Future

There is conjecture that Slab City might be sold in the near future, meaning the entire premise of the area as the last free place in America will be no more. If a company buys up the land, they could potentially kick everyone out and re-purpose the land. Currently, it's rumored the residents have formed three groups to try to purchase the land, with one group already raising enough to purchase their one-third share, but the others are far from their intended goal.

With the looming prospect that the State of California will eventually sell off all the land, now is the time to plan a trip to Slab City if you want to experience it for the truly unique attraction it is.