The Appalachian Trail (commonly called the AT) is a 2,174 mile footpath running through the Appalachian mountain chain. The trail runs much of the length of the eastern United States, beginning on Springer Mountain in Georgia and ending on Mount Katahdin in Maine. The Appalachian Trail passes through 14 U.S. states and even has an unofficial international extension into Quebec. The trail is well-known by hikers around the world. Completing a thru-hike, or walking the entire length in one season, is a triumph completed by only a few hikers each year.

About the Appalachian Trail

The Appalachian Trail is maintained by a staff of over 4,000 volunteers donating as many as 175,000 hours of work. Most of the trail runs through protected wilderness along the ridges of the Appalachian mountains. The Appalachian Trail Conservancy (ATC) organization coordinates these efforts and ensures one of the largest nature preserves in the world remains pristine.

History of the Trail

The Appalachian Trail was conceived by a forester named Benton MacKaye in 1921. His idea was to create a trail that would make wilderness escapes possible for city-dwellers. The idea quickly caught on and was adopted by the Palisades Interstate Park Trail Conference as their chief project.

Over the next 15 years pieces of the trial were completed as volunteers and suitable paths were found. Then, on August 14, 1937, the last stretch of trail was cleared between Spaulding and Sugarloaf Mountains in Maine. The super trail was completed and a footpath spanning the ridges of the Appalachian Mountain chain was complete.

The official path of the Trail changes somewhat with each passing year. Due to land ownership and the changing mountain landscape, volunteers move sections of the path to keep the trail clean and unobtrusive to the wildlife. Distinct white markings placed throughout the trail guide hikers on the official path, and maps produced by the Appalachian Trail Conservancy are constantly updated. 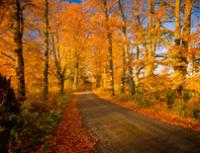 Want to hike the Appalachian Trail? Get your gear ready, it can be a tough trip for inexperienced hikers. Consider taking a short section of the trail and hiking only for a few days. If you're up to the task, plan for a longer getaway and section off a number of miles or a number of weeks to be out on the trail. You'll need to be thoroughly prepared mentally and physically and have the proper tools necessary for the journey.Walking the length of the trail will take between five and seven months with some of the shortest times clocking in at just 12 weeks. Only one fifth of the hikers who intend on making the entire thru-hike complete their journey. Generally hikers begin walking the Appalachian Trail in the spring at its southernmost point. This allows for optimal weather conditions as they near Maine in the fall.

There are a number of good resources for information on hiking the Appalachian Trail.

Accommodations on the Trail

Along the trail are free shelters spaced at seemingly random intervals. These structures have three walls and a wooden floor and are available for anyone to sleep on. And when you're hiking, they feel like a five-star hotel.Though most of the trail runs through Appalachian ridges, there are places where hikers can easily go into town. Many use these opportunities to rest in a comfortable bed and get a hot meal before continuing their journey.