Palm Beach is home to a variety of dining options-everything from casual local favorites and beachfront dining to celebrity chefs and high-end fine dining. No matter what type of food you are looking for, you're… Keep reading »

Florida's Panhandle region in the northwest portion of the state, along the Gulf coast, is closer in temperament to southern states, like Mississippi and Alabama, than to most of Florida. Maybe that's because it's a lot closer geographically to those states than to most of Florida's major cities. The region, which includes Pensacola, the state capital Tallahassee, and the resort cities of Destin, Panama City, and Fort Walton Beach, was the most recent area of Florida to see an influx of tourism. The Florida Gulf coast today, is an ideal family resort destination and is dotted with low-rise, waterfront condominiums and pier-side restaurants. The Gulf beaches are some of Florida's best, with the warm and serene Gulf waters lapping at the shore.

From St. Augustine to Jacksonville to Florida's "Space Coast," the east coast of Florida is lined with white sand beach, highrise condos, and selective green spaces. It's also home to the Kennedy Space Center, the base and launching site for the Space Shuttles. Visitors can tour the many educational exhibits at the facility as well as get a taste of space flight at the Spaceport Theater. Merritt Island, just south of the Space Center is home to an abundance of Florida bird life and is a national protected area. Further south, Cocoa Beach, Daytona Beach, Melbourne, and Vero Beach offer visitors a relaxed seaside atmosphere within an hour's drive of Walt Disney World and other Central Florida attractions.

Central Florida is the most popular of Florida travel destinations, thanks to the Disney Company and their Walt Disney World theme parks. Once a rural citrus farm community, Orlando burst into international stardom in the mid-1970s with the opening of Disney's Magic Kingdom. Today, there are over 80,000 hotel rooms in the greater Orlando area and Disney has four major theme parks as well as waterparks, shopping centers, mega-resorts, and an evening entertainment complex. Outside of the 43-square mile Disney compound, Universal Studios Orlando, Sea World, and other smaller attractions compete for tourists' attention.

Florida's west coast has a calm and relaxed atmosphere. It's home to some of the country's best beaches as well as the cities of Fort Myers, Tampa, St. Petersburg, and Sarasota. Casually elegant resort towns, such as Naples, Sanibel Island, and Captiva Island sit just down the road from affordable family resorts such as Clearwater Beach, Tarpon Springs, and St. Petersburg Beach. The west coast of Florida has something for every budget. Fishing, watersports, and shelling are popular activities here. 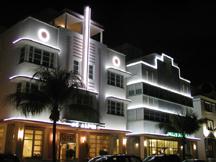 South Florida - Miami and Dade County - is a cornucopia of cultures, music, food, and fashion. Oh yeah, there's a great beach and some pretty spectacular architecture, too. Miami is home to a vibrant Cuban community spread throughout the city, but whose heart lies in Little Havana, just north of downtown. This exciting area is filled with delicious home-style Cuban cuisine, a salsa beat, and hand-rolled old-style cigars. Dodge Island, just off the coast of downtown Miami, is home to the largest cruise ship terminal in the world. Each weekend, a dozen mega-liners slip into and out of port taking tens of thousands of passengers with them. Watching their comings and goings is fascinating and a nice way to spend a Saturday - or Sunday - afternoon.Miami Beach, the 60s resort of the stars, has come back to life with its fashionable stores, non-stop nightlife, and beautifully-restored 1930s circa Art Deco hotels and apartment buildings. Restored through private donations and the tenacious efforts of one South Florida visionary, Barbara Capitman, the "South Beach" area is a tribute to how much of a difference a "grassroots" effort can make.

The Florida Keys stretch over one hundred miles from Florida City, just south of Miami to Key West, the southernmost point in the continental United States. They include Key Largo, Marathon Key, and Islamorada as well as Key West. Sportsfishing is excellent all along the Keys and several luxury lodges, such as the Cheeca Lodge, have sprung up along this stretch of islands. Key West, made famous as the winter home of writer Ernest Hemingway, has a casual Caribbean insouciance. No one dresses up here. The food is fresh and favored local seafood, the drinks are laced with rum, and the music has a decided island lilt to it. It's no accident that modern artists, such as Sammy Hagar and Jimmy Buffet have made it their home.