Article Highlight: Things to Do in Maui

From its blissful beaches to its spectacular natural wonders, there is no shortage of things to see and do in Maui. This beautiful Hawaiian island rightly earns its reputation as a top spot for honeymooners,… Keep reading »

The Hawaiian Islands and Hawaii travel, have a kind of mystic appeal for most of us. These volcanic atolls evoke a sense of exotic, tropical beauty, warm breezes, and friendly people. The beaches of Hawaii have drawn visitors for centuries, but they became accessible to the masses after the advent of affordable jet air travel in the 1950s and 1960s. Spurred on by former World War II GIs wanting to show their spouses the lovely islands where they spent their R and R days in the war, Hawaii tourism boomed. Today, the islands still offer visitors delightful beaches as well as soaring surf, delicious restaurants, fascinating Polynesian history, and a variety of unique activities. This Hawaii travel guide gives an overview of the major Hawaiian islands and what to do there.

The largest of the Hawaiian Islands, Hawaii, often called the "Big Island," is also the most diverse. Its many attractions include the alluring Volcanoes National Park, home to the active Mauna Loa and Kilauea volcanoes. Because it is a slow, sputtering volcano rather than a dramatic one, visitors can walk up to the very rim of Kilauea and watch the show. Elsewhere on the island, sun lovers can enjoy the black sand beaches, another remnant of Hawaii's volcanic past.

History buffs will enjoy touring the Hulihe'e Palace, a former vacation home of the Hawaiian royalty located along the waterfront in the historic Kailua-Kona district, and now a museum, filled with traditional Hawaiian furniture, table service, paintings, quilts, and other decorative arts. Luxury beachfront resorts line the west coast of the island and visitors venturing further inland can tour an orchid farm, a working cattle ranch, and even ski during most of the year. 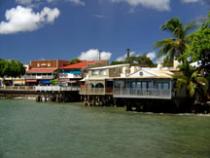 Maui is an island with many faces. It has the luxury beach resort villages of Kapalua and Kaanapali. It has the gracious, scenic, and remote village of Hana, on the southeast shore of the island, home to the luxury Hana-Maui resort and hundreds of pristine waterfalls. It has the imposing slopes of Mt. Haleakala, renowned for its beautiful sunrises. It also has Lahaina, an 17th century whaling village and missionary outpost, whose history can still be glimpsed in the many restored buildings there.Maui is Hawaii's prime whale watching center. Each year in late November, the gentle humpback whales start arriving from their summer homes in the Bering Sea to spend the winter in the warm Hawaiian waters. The whales stay until early June, with the peak viewing months being January through April.

The island of Oahu is home to the state capital, Honolulu, Waikiki Beach, Pearl Harbor, and two of the world's best surfing beaches, Sunset and Waimea. The bustling city of Honolulu offers visitors the benefits of a large city, such as excellent shopping and fine dining restaurants, in a scenic tropical setting. White sand, Waikiki Beach spans the downtown shoreline. Spend the day at the beach or sip a tropical cocktail beachside at one of the many resorts that line the beach.

Outside of town, the somber Arizona Memorial at Pearl Harbor is a moving tribute to the sailors and airmen who lost their lives that terrible day in December, 1941. Further inland, the Mormon-run Polynesian Cultural Center contains seven authentically recreated villages, representing the cultures that came together to populate the Hawaiian Islands. Dance, music, food, and film help educate visitors about these diverse people.

On the north shore of Oahu, Sunset and Waimea beaches are home to some of the most dramatic and challenging surf in the world. Sip a soda or a beer and watch the talented surfers ride the waves - or try it yourself, if you dare.

The scenic island of Kauai has starred in many films, including the musical, South Pacific, Disney's Lilo and Stitch, and Jurassic Park. Kauai is filled with scenic wonders, from the lush and tropical fern grotto, site of many an island wedding, to the deep and craggy Waimea Canyon, a smaller and more colorful version of the Grand Canyon.Her beaches are wide and uncrowded and a gentle breeze cools sun worshipers there. Kauai is a quieter island than Oahu or Maui, but there's a historic elegance that's missing on the more bustling islands. For a look at Hawaii as it once was, take a helicopter tour along the undeveloped and steep Pali Coast.

Just eighteen miles long at its longest point, Lanai consists mainly of pineapple plantations. The scenic island is also home to two luxury resorts, the beachfront Manele Bay and the inland, Lodge at Koele. Lanai has little nightlife or shopping, but it is a perfect destination for honeymooners or anyone looking to "get away from it all."