Normandy is a province of France, located along the English Channel northwest of Paris. It is the ancestral home to the Normans, the last people to invade England successfully, and the region draws in countless… Keep reading »

From the rugged Alps to the misty maritime shores of Brittany, from the chic charm of the French Riviera to the history, culture, and fashion of Paris, a travel France itinerary is varied, beautiful, and intriguing. Traveling in France can encompass the elegant chic of Paris, the relaxed countryside of Burgundy or the Loire, wine tasting in Champagne of Bordeaux, or sunbathing on the Riviera.

"The City of Lights," Paris is elegant, chic, and filled with history, culture, monuments, and great food and shopping. The monuments of Paris are world famous. Who hasn't heard and seen pictures of the Eiffel Tower and the Arc de Triomphe? The museums, too, are varied and interesting, and include well-known sites, such as the Louvre Museum as well as lesser known gems, such as the Marmatton Museum, filled with works by Claude Monet, on the edge of town in the 16th arrondissement. Shoppers will delight in the many boutiques and antique stores as well as the grand Belle Époque department stores, Les Galleries Lafayette and Le Printemps.

As beautiful as Paris is, the true France is found in the provinces. From the picturesque northwest shores of Brittany to the jagged peaks of the Alps, the French countryside is inviting, welcoming and full of delicious regional cuisine and wines. Most places in France are easily reached from Paris via high-speed TGV trains. From Paris to the Riviera is just three hours. Just outside of Paris lies the charming Chateaux country of the Loire River Valley. Dozens of grand palaces here give visitors the chance to relive French history.

Normandy, to the northwest of Paris, holds a mixture of English (Norman) and French history. The famous battle of Hastings, which ended in the Norman conquest of Britain, is depicted on the intricate and fascinating Bayeux tapestry, on display in the picturesque town of Bayeux. Also at Normandy is the sobering World War II memorial and cemetery, a solemn reminder of the Allies invasion of Normandy in 1944. 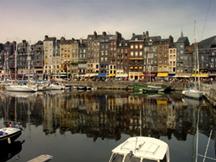 The South of France

The French Mediterranean Coast has been a bustling seaport since the days of ancient Greece. Marseille still shows examples of the Greek, and later Roman, architecture. The city also has a lively historic old town as well as a historic port, still active today. Visitors can order a steaming bowl of Bouillabaisse, a Marseille favorite, and watch the fishing boats return to port. Further down the coast, sun-drenched, international playgrounds, such as St. Tropez, Cannes, and Antibes vie for visitor's attention. Near the Italian border, the small principality of Monaco offers elegant casino gambling, a scenic yacht harbor, and beautiful Beaux Arts hotels.

Most points in France are easily accessible by plane or train. Major international airports in Paris, Toulouse and Nice - and also Geneva, which is on the border - handle overseas flights from the United States and Canada. From Paris, visitors can connect to cities throughout France, or take one of numerous, clean and efficient trains that criss-cross the country. France's high-speed trains, called TGVs, are a particularly quick and efficient way to travel, and at Paris Charles de Gaulle (CDG) airport, the high speed train station - with connections all over France - is actually inside terminal 2.Accommodations in France range from small country inns to bed and breakfasts to former castles turned hostelries. Paris and other major cities have grand luxury hotels as well as more modest one and two-star hotels. There are also many national chains such as Accor or Envergure, with hotels from one star to four star; among the popular middle-of-the-range hotels are Ibis (Accor), Kyriad (Envergure) or Etap', which can be found in, or often on the outskirts of, most towns. Among the cheapest out-of-town hotels are those under the Formule 1 brand (Accor), a similar concept to America's Motel 6 apart from the fact that they are hotels, not motels. French hotel rooms tend to be smaller, don't always have private baths (be sure to ask), and usually provide some sort of breakfast - usually a Continental breakfast. However, except in top-of-the-range hotels, this is not usually included in the room rates.

Vacation rentals: If you plan to stay for a week or more outside one of the major cities, a great idea is to choose a "gite", which is the French term for vacation rental accommodations. There are vacation rentals located all over France, mostly in attractive parts of the country; many have owners who speak English, and the best way to find these is to key "gites france" into Google or a major search engine, and follow the results. You can also visit one of the English-language sites offering direct contact with owners, such as the Gitelink cottage and gites directory, which have properties to rent all over France.

Getting around Paris is easy with the Paris Metro subway system. Many of the lovely original Art Nouveau Metro stations still stand and lend a certain charm to the commute. Driving yourself is to be avoided in Paris. Just as in New York City, the Parisians have a system all their own. Outside of Paris, a car rental can be a relaxed and charming way to explore the countryside, and France is equipped with an extensive and high-quality highway system. French "autoroutes" are generally turnpikes, and similar to US interstates.