Cleveland, Ohio, is a sparkling jewel set against the ever-changing seascape of Lake Erie. Whether you take in the downtown skyline from a boat tour, or view the many wonders featured in the Rock and Roll Hall of Fame, Cleveland will intrigue, delight, and endear itself to you.

The Rock and Roll Hall of Fame is one of Cleveland's most popular attractions. Called the "Rock Hall" by residents, the angular white and glass structure sits at the edge of Lake Erie in downtown Cleveland. Permanent exhibits include one of Diana Ross' sequined gowns, hand-written lyrics by Janis Joplin, and Jr. Walker's saxophone, as well as some artists' personal items, such as John Lennon's report card and Jim Morrison's scout uniform.

While the Rock Hall is a huge draw, it's not the only hot spot in Cleveland. Other must-see spots to visit include:

After a rocking tour of the Rock Hall, a great place to take it down a notch is the Great Lakes Science Center. Not only is the Center filled with over 400 exhibits, it also includes the NASA Glen Visitor Center with the giant Skylab 3 Apollo Command Module, and the OmniMax Theater with a six-story high movie screen.

Along with the Rock Hall and the Science museum, the city also features the Cleveland Museum of Art. This diverse museum, one of the last museums with free admission in the U.S., features a large French Impressionist collection, as well as a colorful armor court, Asian and Indian art exhibit, and 19th century sculpture by artists such as Degas and Rodin.

Sports fans will love visiting Cleveland with its pro football, baseball, and basketball teams. Get tickets to see the Cleveland Browns, the Cleveland Indians, or the Cleveland Cavaliers up close and personal. Even though ESPN has crowned the city the "Most Tortured Sports City in America," the teams are still a lot of fun to watch. 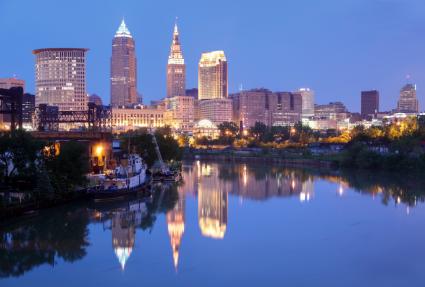 Cleveland's largest excursion ship, the Goodtime III, offers visitors and locals alike a view of the spectacular downtown skyline. The cruises feature entertainment, such as sightseeing, meals, cocktails, and dancing. The company also offers both public cruises and private charters, and it sails rain or shine.

University Circle is Cleveland's cultural hub. In addition to the Cleveland Art Museum, this area is home to Case Western Reserve University, the Cleveland Museum of Natural History and its fun and educational dinosaur exhibit. It also boasts indoor and outdoor exhibits at the Cleveland Botanical Gardens, the Crawford Automobile and Aviation Museum, and the Western Reserve Historical Society Museum, which features diverse exhibits on life in Cleveland from the city's founding to the present.

The different nationalities that make up Cleveland play a big part in the city's cuisine. Esquire Magazine named the city "Home of the Best Corned Beef Sandwich in America." The area is also known for its perch caught locally in Lake Erie. You can find fresh fish and a ton of other local favorites at the following downtown eateries:

After a full day of exploring the city's top attractions, you'll want to rest up at the following top hotels:

All You Could Ask for and More

A trip to Cleveland, Ohio, may start with a tour of the Rock Hall, but C-Town has much more to offer. The diverse area has culture oozing from every street corner. There is so much to explore, you might just find yourself extending your stay or booking your next trip before you leave.