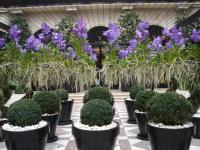 The Four Seasons George V has received most of the top awards that the travel industry has to offer since its renovation and reopening in 2000. There are 245 rooms including 61 suites; 30 of the suites and deluxe rooms have private terraces or balconies. It is situated within walking distance to the Arc de Triomphe, Place de la Concorde and the Eiffel Tower.

Concierge and the Level of Service 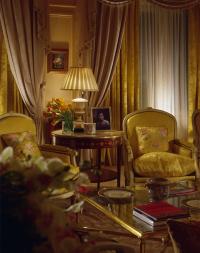 I had forgotten some medicine and was going to have my assistant FedEx it to me. I consulted the concierge and he pointed out that it would take at least two days - and could take longer since the customs could hold it up. "May I get you a doctor's appointment so that you could have your medicine tonight?" Wow. Gee, sure. That's the type of over-the-top service you get here. I had been told about it many times and I usually kind of rolled my eyes when I heard it from others. It's so easy to get your hopes high and be disappointed. Instead at the George V, I went in with my expectations high, and the Cinq had no problems not only fulfilling my bloated expectations - but then they kept surpassing them. Time after time. I needed an adapter, since like most Americans I am overwired. The technician showed up with enough power equipment to light up a small city. I called down for a network wire. The polite operator suggested I open the drawer a couple of inches from my left hand - and there was the cable I needed. It just kept happening like that. There is an extreme anticipation of your needs. My portable speakers didn't work for my iPod. The technician showed up with a special cable to connect it to the in-room sound system. This type of service just kept happening. Service companies have studied Stu Leonards, and Disney. They will soon be studying the George V for how to excel in the service business. 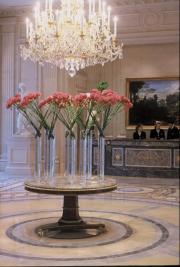 One of the first things that strikes you when you enter the hotel lobby are the sensational flowers. They are dramatic and ever present. The floral designs are the work of Jeff Leatham and his team of seven assistants. Over 14,000 blooms are purchased each week directly from the Netherlands. The arrangements in Le Cinq restaurant will take your breath away.

Le Cinq is the Michelin 3-star restaurant in the Four Seasons Hotel Georges V with Phillipe Legendre as its star chef and Eric Beaumard as its director. It is rated by Zagat as the top one in terms of service. The dining room is formal. The waitstaff is friendly and efficient. The food was French style and sensational. The wine list was primarily French, with small selections from other countries. There was a wide range of prices, so one did not feel forced into the high end. The sommelier was very helpful and will match the wines to your meal. We started off with a L. Carillon 2003 Puligny Montrachet, and then had a sensational JP Jamet 2002 Cote Rotie. After a sensational meal we were treated to the "Chocolate cart", which had a wide selection of chocolates and sweets. As a great memento for remembering the dinner, we were presented with a custom printed menu that included what we had ordered and the wines that we enjoyed. This is one of the most memorable meals that you are likely to enjoy in this life. And yes, it is also one of the most expensive you are likely to have. Worth it? Absolutely!

When people kept telling me that the Four Seasons George Cinq hotel was the best hotel in the world, I guess I never really listened, because I wondered just how good a hotel can be.After "stress testing" this hotel in every way, usually inadvertently, they came up smelling like roses. Sure, its expensive, but the value is greater than the price. In short, if you are going to spend this kind of money, I can't think of a better place to spend it.