The island of Oahu, home to Hawaii's capital, Honolulu, is the first stop on most Hawaiian vacation itineraries. The island has a lot to offer visitors, including magnificent white sand beaches, stunning sunsets, amazing historic landmarks and unprecedented cultural wonders. With so much to see and do, it helps to plan your trip in advance with the help of an Oahu travel guide.

Honolulu is the starting point for many Hawaiian vacations since it is home to the only commercial airport on the island of Oahu. Whether you are flying inter-island or you are jetting in from the mainland or beynd, you will have to spend some time at the Honolulu International Airport. From there the world-famous city is your oyster. Given its size and the fact that the majority of Oahu's population resides in Honolulu, you will not be at a loss for things to do. Some can't miss attractions include:

One of the most famous beaches in the world, Waikiki is an active public beach that extends for miles along downtown Honolulu's waterfront, from the Ala Wai Canal all the way to Diamond Head. Waikiki is full of activity, and visitors can rent windsurf boards, catamarans, and canoes from vendors on the beach. This is also a great beach for beginning surfers, as the waves roll gently onto shore.

Before Hawaii became the United States' 50th state, the islands were ruled by the Hawaiian royal family. The gracious Iolani Palace, constructed in 1882, was the official residence of King David Kalakua and later, Queen Lili'uokalani. It is America's only royal palace and shows the Hawaiian monarchs' obsession with all things European. This carefully restored residence features Douglas fir wooden floors, French-style carved moldings, and ornate, gilt furniture. Today, the lovely home is dedicated to preserving Hawaiian culture. You can take a quilting class here or listen to a Hawaiian concert in the manicured, tropical gardens.

Diamond Head State Monument, the looming volcanic crater that dominates the Honolulu skyline, is one of the most recognizable landmarks in Hawaii. Its 760-foot high slopes are one of the first sights Hawaii travel visitors see of the islands. Named by early white settlers who mistook the crater's sparkling rocks for diamonds, Diamond Head is a scenic spot for a leisurely hike, a picnic lunch, or an escape from the bustle of the nearby city. 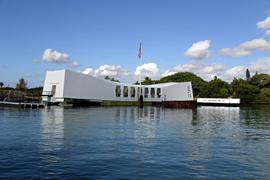 Just outside of Honolulu and still a working naval base, Pearl Harbor will forever be remembered by Americans as the site of the terrible and tragic attack on December 7, 1941. Today, visitors can take a brief boat ride out to the Arizona Memorial, built atop the S.S. Arizona, still located just under the water, and the final resting place of over 1100 officers and sailors. The memorial is a solemn and thought-provoking tribute to the lives lost there. On land, a visitors' center tells the story of that fateful day.

Featured on Baywatch and the Fox TV series North Shore, Oahu's North Shore is home to some of the most challenging surf in the world and an essential addition to any Hawaii travel itinerary. Sunset Beach, along this coast, is home to the infamous, Banzai pipeline, a breaking, rolling wave and reef combination that surrounds surfers completely in a wave. This area is also home to a number of international surfing competitions. Surfing here is best left to the experienced, and you'll find the best-of-the-best here. Grab a tropical libation and take in the rugged sea views and the exciting surfing action.

Also, no Hawaii travel plans would be complete without a visit to the Polynesian Cultural Center. Located about an hour's drive outside of Honolulu, this fascinating complex is well worth the trip. This 42-acre park takes visitors inside seven carefully recreated and authentic villages representing the different cultures that came together to populate the Hawaiian Islands. There's a Samoan, ancient Hawaiian, and Tahitian village, among others. See poi being pounded by hand or tree back transformed into tapa cloth. An IMAX theater, musical presentations, and dance exhibitions help to illustrate the diverse cultures.

Oahu has a litany of outstanding hotels and resorts suitable for all budgets, including these popular picks:

Hawaii's culinary scene is one of the best in the world. It features a heavy emphasis on locally grown produce and fresh seafood, as well as a strong Asian influence. If you are looking to sample the local flavor consider these tasty options:

When planning a trip to Oahu it is vital to allow yourself time to explore all the island has to offer. For many the prospect of covering the entire island in a single visit is a bit daunting. To aid you in your explorations and help you devise a master plan, visit Hawaii's official tourism site.