The Hoover Dam is one of the most prominent manmade wonders in the world. Situated in the Black Canyon on the border between Nevada and Arizona, it is approximately 30 miles Southeast of the vibrant city of Las Vegas. In addition to being a fully functional hydroelectric power station, the Hoover Dam has also become one of the region's most popular tourist attractions. Nearly 1 million tourists flock to see the dam each year, with the United States Federal Highway Administration estimating traffic across the bridge at 13,000 to 16,000 visitors each day. Since 1985, the dam has officially been recognized as a National Historic Landmark, making it part of an elite group of visitor attractions spread throughout the States.

Construction of the Hoover Dam began in early 1931. It was designed to create a huge manmade lake, using a tributary from the Colorado River, in order to harness the raw power of water for use in the creation of useful electrical energy. Frank Crowe of Six Companies, Inc. oversaw the construction.

The process of building the Hoover Dam lasted a little under 5 years, which was an astounding two years ahead of schedule. The project cost the government $49 million, which in modern terms would equate to around $676 million.

The dam stands 724 foot high with a 660 foot thick walls. In all, around 3.33 million cubic meters of concrete was used to support the gargantuan construction. The 17 water turbines, through which the water passes, create around 2,080 megawatts of energy. This energy powers millions of homes and businesses in the local area. 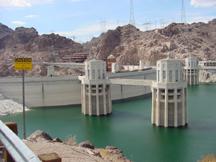 The Intact Towers at Hoover Dam

The name of the dam derives from the former U.S president, Herbert Hoover. The lake created by the huge dam, Lake Mead, is also part of the tourist spectacle. With 8 to 10 million visitors each year, it is the 5th busiest U.S National Park.

Visitors to Hoover Dam are able to purchase tickets for the dam's "Discovery Tour." This tour takes guests around the mechanics and the infrastructure of the colossal structure, with guides offering information and historical facts. The tour not only shows visitors the physical building, but also offers a number of exhibits and films in specially designed theatres. These tours leave every 15 minutes and run from 9:00 am until 5:00 pm, with the box office selling the last tickets at 4:15 pm.

Tours of the dam take place every day of the year, except Christmas Day and Thanksgiving Day. Adults can expect to pay around $11 for the tour, while military veterans and seniors pay about $9. Children between the ages of 7 and 16 pay $6 and children under 6 are free. Parking in the official parking lot costs an additional $7 per vehicle. To check on the most current prices and information, visitors can go to the U.S Bureau of Reclamation website.

Tips for the Visit

For those without their own transport, there are numerous coach trips available from Las Vegas and the surrounding regions to Hoover Dam. No matter how they get there, those wishing to visit Hoover Dam need to consider a few things before traveling. First, Hoover Dam is situated in the Nevada desert. Therefore, temperatures can soar during the summer months. Tourists should consider bringing or purchasing drinks to remain hydrated during their visit, particularly those with children.

Visitors also should be aware that certain items, such as food, chewing gum, and drinks in a non-clear container, are not allowed at the Hoover Dam. This is because it is a working hydro-electro plant and these items can be devestating to its functionality. Families should also be sure to make sure children are well protected from the sun and watched closely. For safety reasons, it is important to note that no one is allowed to sit on the wall of the Hoover Dam after dark and large vehicles may be periodically restricted from crossing.