Key West is America's southernmost city, just 90 miles from Cuba. The end of a string of barrier islands off of the coast of south Florida, Key West is a mixture of island insouciance, Victorian architecture, and world-class sports fishing. A popular tourist destination, the island has been home to a number of notable Americans. Among them are Ernest Hemingway, Harry Truman, Calvin Klein, Tennessee Williams, and Jimmy Buffet.

Key West was originally inhabited by the Native American Calusa tribe. The area was first "discovered" by the Spanish explorer, Ponce de Leon in 1521. The island shuttled between British and Spanish control before becoming part of the United States in the late 18th century. For decades, however, the area was little more than a fishing village.

It was Henry Flagler who brought development, and tourism, to the area when he built the Overseas Railroad extension in 1912, connecting Key West with his fashionable resorts along the east coast of Florida. The rail line was destroyed in 1935 by a tremendous hurricane, but was replaced by the US government with the current Overseas Highway. Tourism stayed and today, it is the region's major industry. 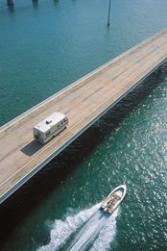 Key West combines history and carefree, island living. Among the many attractions on the island are:

Key West has its own small airport and connections to the island can be made via Miami from points all over the world. In addition, many visitors choose to drive highway 1 the 129 miles from Miami. The scenic two-lane road passes through Key Largo, Marathon Key, and Islamorada and over numerous bridges before arriving at Key West, the end of the line.Accommodations on Key West range from large resort hotels, such as the Hyatt Regency, to small guest houses, many located in Victorian-style homes. A number of home rentals are also available on the island. Key West is not known for its beaches and the few that are there are small cove beaches or man-made sand reefs. However, many of the island's hotels and guest houses offer sweeping water and sunset views.

Getting around the city of Key West is easy without a car. Many of the attractions, bars, and restaurants are within walking distance of one another. However, if you wish to explore the rest of the area and the neighboring islands, renting a car is advisable.

Key West is also becoming increasingly popular as a cruise port and several lines, including Carnival Cruises, Royal Caribbean, and Holland America include regular stops there.