The many New York City zoos and aquariums give Families planning a visit to the New York City area have many options to get closer to the wild. The many parks and sites provide a fun and educational experience that appeals to the entire family. From insects to whales, there is definitely something to see and do for everyone in the family.

Many of the New York City zoos and aquariums are maintained and managed by the Wildlife Conservation Society. Therefore, families that choose to become a member of this organization can receive free or reduced admission to many of the zoos.

The Bronx Zoo offers 265 acres filled with wildlife and nature, making it the largest of the New York City zoos. The biggest attraction at this zoo is the 6.5 acres of forest, which is home to many different animals - including the Conga Gorillas. In addition to the animals found in the forest, the zoo has over 4,000 animals for families to enjoy and discover. 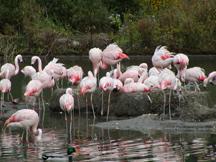 Flamingos at the Bronx Zoo

On the other end of the spectrum, the Staten Island Zoo provides a home to some of the smaller animals of the world. In fact, the collection of fish found here is one of the largest collections in the country. The international farm animals grazing at the Children's Center will be sure to please the children. Perhaps the biggest highlight of the Staten Island Zoo, however, is the re-creation of the African Savannah. This tropical Savannah provides families with a first hand look at wildlife that is native to Southern Africa.

The Central Park Zoo is a great stop for the family to enjoy a little nature while on a shopping trip. Located in Manhattan, the Central Park Zoo is home to creatures of all sizes. From ants to polar bears and everything in between, there is no shortage to the many different species available for viewing. Nestled on 5 acres within Central Park, the zoo is in the heart of New York City.

Queens Zoo is one of the newest zoos in the New York City area. It has also recently re-opened its doors with millions of dollars worth of renovations. The zoo features animals displayed in environments specific to their own natural habitats. The American Bison, for example, are allowed to roam as freely as if they were at home on the Great Plains. The California Sea Lions are right at home in waters that resemble the Pacific Ocean.

Children will enjoy the wide variety of sea life on display at the New York Aquarium. The goal of the aquarium is to provide the public with knowledge of the underwater world, while maintaining a forum encouraging people to become involved in the preservation of the world's oceans. A welcome retreat outside of the hustle and bustle of the city, the New York Aquarium offers families the opportunity to become "one" with the sea. The peaceful lulls of the sea make a great environment to sit back and relax.