Enviably situated on the shores of sparkling Cayuga Lake in New York state's Finger Lakes district, Ithaca is noted for spectacular gorges and a remarkable collection of 150 waterfalls within a 10-mile radius of downtown. In an area known as the wine region of the East, local landscapes underscore the scenic beauty signified in the meaning of "I Love New York."

Left behind by glacial movements two million years ago, New York's Finger Lakes resemble handprints scratched into the earth's surface. Of these 11 long, deep, and narrow freshwater lakes, Cayuga is the longest at 40 miles.

Pinpoint Ithaca on a Map

Distinctive waterfalls and gorges are Ithaca's signature look. Considered among the loveliest college campuses in America, Cornell University is the location for some of Ithaca's most notable landscapes. The campus provides access to hiking Fall Creek Gorge and Cascadilla Gorge where eight waterfalls drop hundreds of feet to downtown Ithaca. See the largest, Ithaca Falls, at 105 feet high and 175 feet wide.

Within 10 miles from downtown Ithaca, Robert H. Treman State Park has the devilishly named Lucifer Falls and its plunge pool, Devil's Kitchen. Buttermilk Falls State Park delivers views of 500-foot watery descents in a series of cascades and rapids, and with a 215 foot drop, Taughannock Falls is even taller than New York state's renowned Niagara Falls.

Less than 25 miles west at Seneca Lake, Watkins Glen State Park has 19 waterfalls connected by 800 stone steps on three wooded trails running over, under, and along gorges open mid-May through early November. 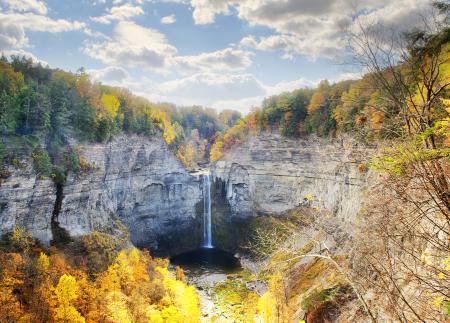 Ithaca Commons is a pedestrian magnet. The downtown hub for retail and entertainment, it's a popular venue for seasonal outdoor concerts and festivals, a farmers market, people-watching, eating out, and shopping. You'll find lots more to see and do in the area too.

The Attraction of Academia

A vibrant college town fueled by buzzy brainpower, Ithaca is home to Cornell University, Ithaca College, and Tompkins County Community College. At the Ivy League university, the campus features six buildings on the National Register of Historic Places and the 2,800-acre Cornell Botanical Gardens. Join a free guided walking tour to see campus highlights or come in summer for the outdoor concert series on the Arts Quad.

Downtown's handsome centerpiece is the historic 1,600-seat State Theatre of Ithaca. Built in 1915 as a vaudeville palace, the venue hosts more than 75 annual events such as concerts, theatrical productions, dance performances, comedy shows, and classic movies.

Wine is an important year-round theme, as Ithaca serves as the gateway to Cayuga Lake Wine Trail, the first of its kind in America. In a region well known for its award-winning Riesling, a map highlights 16 wineries plus cideries and a brewery along one of the Finger Lakes that is home to the oldest wine producing region in the eastern US. 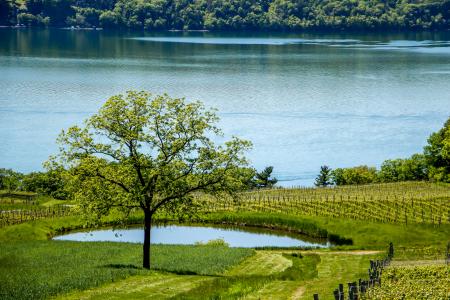 Social gatherings that are fun for the entire family also take place around local themed seasonal events, including:

Only in Ithaca Activities

Several Ithaca places of interest are one-of-a-kind and recommended for children too.

Calling itself a foodie paradise, the local tourist board says, "We crunched the numbers and it's true: Ithaca, NY has more restaurants per capita than New York City!" The best-known is Moosewood Restaurant, operating as a collective for 40-plus years with an emphasis on healthy produce as illustrated in their 13 vegetarian cookbooks.

Several dozen lively eating and drinking places are in the retail and entertainment mix of this small city's downtown hub. Try some of these near The Commons for a range of ethnic variety and classic Americana:

Night time entertainment in Ithaca centers around a thriving live music scene and guest DJs in clubs where you can kick up your heels.

Cornell has the world's oldest and finest School of Hotel Administration, so visitors to Ithaca may opt to stay at AAA Four Diamond-rated The Statler Hotel on campus, where students participate in the 153-room property's management. As a "teaching hotel," 200 students work in every department, including the kitchen serving its three restaurants. 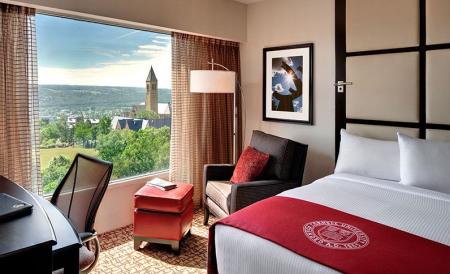 The Statler Hotel at Cornell University

In addition to The Statler Hotel, visitors to Ithaca can choose a well-regarded guest house or a cozy bed-and-breakfast establishment. This search engine makes it easy to select lodging by type of accommodation or requirements as well as vacation packages by desired dates.

Those who have hiked the trails of upstate New York can attest that Ithaca is a special place.