Known as the "City of Lights," Paris is pedestrian friendly with wide, straight boulevards that reward sightseers with glimpses of famous landmarks. Walking along the Seine, discovering the various neighborhoods, drinking coffee on sidewalk terraces and visiting the city's wealth of art museums are just some of the activities that make this city one of the world's most popular destinations.

Before you start making your way to Paris, be sure to consider these key factors.

International trip planning requires you to have your travel documents in order, including your passport.

Travelers flying from the U.S. to France are not required to get any unique shots or take particular safety precautions. However, you should stay informed via the State Department's free Smart Traveler Enrollment Program (STEP). Enrolling on the website allows you to receive travel updates as they are posted. The Embassy Paris webpage also keeps you notified of any current travel notices.

Flying is the most common method of travel from locations within the United States to Paris. Flight times vary depending on what part of the country you depart. Typically, you can expect the flight to take eight hours from New York, a little over nine hours from Chicago and just under 12 hours from Los Angeles.

Charles de Gaulle airport is located near Paris and has a number of ground transportation options from the airport to your hotel in the city.

If you are planning to rent a car while in Paris, check international driver's license requirements. For the record, the French drive on the right just as they do in the United States.

When planning a trip to Paris, France, don't miss the following sites, all accessible via the city's extensive metro system.

This famous Gothic Cathedral was laid out in 1163 by King Louis IX. It took 150 years to complete and today it boasts some of the best-preserved examples of "flying buttresses" (the exterior, angular, building supports). The massive cathedral fell into disrepair during the turbulent times following the French Revolution and would have been torn down if not for the efforts of Hunchback of Notre Dame author, Victor Hugo. Notre Dame is still an active parish, and visitors can attend mass there every Saturday and Sunday.

The cathedral is located on the Île de la Cité, in the center of the city. The closest metro stations are Cité and Hôtel de ville. Visit the Notre Dame de Paris website for an up-to-date schedule of masses and concerts open to the public.

No visit to Paris would be complete without strolling along the Seine. The vital waterway cuts through the center of Paris. A variety of watercraft sail up and down the river, from elegant and romantic dinner and dancing cruises to historical sightseeing tours. The river gives visitors a unique perspective of the city. 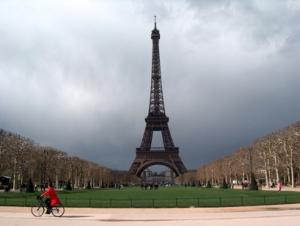 The most famous landmark in Paris is the Eiffel Tower. Designed by engineer, Gustave Eiffel in 1889 for the World's Fair, the famous tower attracts thousands of visitors a day. You will spend less time waiting in line if you buy your tickets online before showing up.

The tower is composed of three levels. You can reach the first two levels by climbing the stairs or taking the inclining elevator, which is an experience in itself. These levels offer open-air viewing. The third level is fully enclosed, but offers spectacular 360-degree views of Paris and the surrounding countryside. Visitors can only access the third level by a separate elevator in the center of the tower.

The Champs Élysées is the most well-known boulevard in Paris. This famous thoroughfare has seen a lot of history in its 150 years; from Napoleon to the Nazis. Today, the avenue is lined with sidewalk cafes, grand movie houses, travel agencies, and haute-couture fashion houses. Don't leave Paris without sipping a café au lait or a glass of white wine and watching locals and visitors stroll by. You can get there by taking a short walk from the Eiffel Tower (just cross the Seine and follow it to the right), or get off the metro at the aptly-named station, Champs-Élysées.

The subterranean tunnels and caverns, gothic in nature, are full of the remains of some of Paris' most famous inhabitants, including remains of many famous names from previous centuries including François Rabelais, Jean de La Fontaine, Charles Perrault, François Girardon and Simon Vouet (I590 - 1649). Open from 10 a.m. to 5 p.m., the Catacombs of Paris are a fascinating and unique diversion from the chic and lively atmosphere above ground.

With most of the rides and attractions of its American counterpart, the Disneyland Park in Paris is the European Disney World, and the largest theme park in Paris. Be sure to visit sister park, Walt Disney Studios. Here you can meet Disney film characters, star in a film yourself and see behind the scene of one of the world's most famous studios.

This complex of museums and monuments, including the military museum, is the tomb of Napoleon Bonaparte. Many of France's war heroes are also buried here.

There is a wide array of museums in Paris, including:

If you are planning to use public transportation to go from one museum to the next, then consider buying the Paris Pass. It provides access to more than 60 museums, as well as bus and boat transportation throughout the city, for a reasonable price.

Individual neighborhoods add to Paris' charm. From the trendy Marais district, filled with funky clothing stores, trendy restaurants, and a spectacular 17th century square lined with arcades and elegant townhouses, to the très chic Saint Honoré district, home to luxury retailers, fantasy jewelry stores, and the best hotels in town, Parisian neighborhoods are an intriguing collection. Stroll among the varied pastry, cheese, and wine shops along the Rue Cler, near the Eiffel Tower, or visit the morning produce market, in the arty Left Bank neighborhood of St. Germain.

If you aren't sure what you want to see the most, plan an organized tour. Taking a tour is a must for any first time visitor, and double-decker bus tours are a great option. One such bus tour in Paris is called L'Open Tour, which allows you an unobstructed view of the city. The tour is provided in eight different languages and features stops at all the major attractions from the Eiffel Tower to Notre Dame and more.

A few other tour options are:

Every trip to Paris has endless opportunities. The city's rich cultural, culinary, and architectural history is awe-inspiring, and perhaps, a little overwhelming. Don't try to see everything in one trip. Like an elegant cocktail party, sample a little bit here and a little bit there, staying a bit longer where the view or the wine is truly unforgettable.