Provence is the scene of many an American's daydreams, thanks to the recent Peter Mayle book, A Year in Provence. As he explains, the region is picturesque and offers excellent food and an easy, relaxed tempo. The area is also rich in history, cuisine, and culture.

Provence, located along the Mediterranean Sea in south central France, has been inhabited since pre-historic times. It was first settled by the Ligurians and later the Celts. Around 600 BC, the Greeks and Phoencians created a trading port at Marseille and shared many of their art, cuisine, and customs with the region. In fact, it was the ancient Greeks who introduced winemaking to the French.

The Provencal city of Avignon became important in the 14th century when Pope Clement chose the city as the home of the papacy after the seige of Rome by Sicily. Seven popes would live in the Pope's Palace at Avignon until the Holy See returned to Rome in 1377. The Roman Catholic Church owned the city until 1791, when the forces of the French Revolution returned it to French rule. 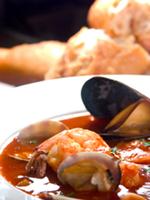 Provencal cuisine is famous throughout the world and draws its strength from the bountiful Mediterranean produce and the fruits of the sea. The food from this region is easily distinguished by its use of garlic, black olives and olive oil, lemons, and produce such as tomatos, zucchini, eggplant, and green beans. Seafood, from whitefish to lobsters, is another trademark of Provencal cuisine. One of the most famous dishes from this region is boulliabaisse, the rich fish and saffron stew made famous by the fishermen of Marseille. Another signature Provencal dish is ratatouille, a sauteed mixture of eggplant, tomatoes, zucchini, and onions.Provence is known for its dry rose wines, called Cotes de Provence. Ideally served well chilled, this delightful libation is an excellent accompaniment to the spicy food of the region. Another Provencal product is Chateauneuf-de-Pape, the universally-treasured smooth red wine, named for the 14th century Papal presence in Provence.

Provence has been a center of art, architecture, and literature for centuries. The Roman aquaduct and amphitheater at Nimes still stand as monuments to that culture's excellent design skills. More recently, Impressionist and post-Impressionist painters, such as Paul Cezanne and Vincent van Gogh, created some of their best work in the region. Authors Alphonse Daudet and Albert Camus are just two examples of the dozens of authors who have made Provence their home.