Located in southeastern New Mexico, Roswell is best known for its associations with the 1947 Roswell UFO Incident. The crash of the mysterious aircraft happened about 75 miles from the town but the name has stuck, encouraging a steady stream of tourists ever since. Today, the town has numerous attractions relating to the incident, as well as other interesting sights.

The Roswell UFO Incident refers to the July 1947 crash of a strange object in the desert outside of Roswell. The local air base investigated the huge debris field and announced it had recovered a flying disk. After that initial announcement, the U.S. Air Force revised the account, stating that the craft was merely a weather balloon. The 'incident' was revived in the 1980s by the tabloid newspaper National Enquirer, and conspiracy theories have proliferated ever since. 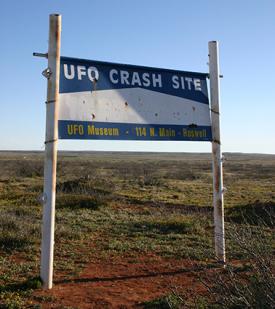 Roswell is not just about the UFO incident. The New Mexico city has some beautiful scenery and great non-UFO related attractions. Examples include:

If you have the time and the means to travel a little further outside the town, also consider visiting Carlsbad Caverns National Park. Carlsbad is a little over 100 miles from Roswell and is well-worth the drive.

Roswell has over 100 eateries, including the following selections.

Roswell is a medium sized town of only 45,000 people. Most of the accommodations are situated on the north main street, just off Highway 70 - within reasonable distance of all the major attractions.

There is a small airport about five miles outside the city of Roswell. If you are driving, the town is accessible via U.S. Highway 285 from Albuquerque and Carlsbad.

For science fiction fans, a visit to Roswell is a must. For everyone else, the town offers great chance to experience peace and tranquility in one of the country's most beautiful regions. In addition to attractions located in Roswell, there are a host of other sights for you to see in the surrounding areas. With a center geared towards tourists, this unassuming town makes for an excellent base for any southern New Mexico vacation.

0
Comments
© 2006-2020 LoveToKnow, Corp., except where otherwise noted. All Rights Reserved.
Resources, Advice & Tips for Covid-19
Read More
Things to Do in Roswell, NM