Russia adventure travel may be anything from a visit to the 19th century majesty of St. Petersburg to the rugged beauty of Siberia. Russia, the world's largest country, spans nine time zones, is home to members of 160 ethnic groups, and offers visitors centuries of history, cultural, and natural beauty to explore.

The most popular travel destinations in Russia are Moscow, St. Petersburg, and Novosibirsk in Siberia, but Russia travel is really only limited by your imagination.

Russia's capital city is steeped in culture, architecture, and mystery. Among the many sights here are:

St. Petersburg, located in western Russian along the Baltic Sea, was created in the 19th century by Peter the Great. He envisioned the city as a rival of Europe's great capitals and built a beautiful city, filled with museums, palaces, and grand expanses. Among the many wonders to be found in this elegant city are: 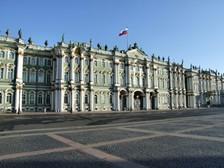 Siberia, in north central Russia, is a rugged, forbidding land, blanketed by a cover of snow and ice for over half of the year. The vast region was largely undeveloped until the completion of the Trans-Siberian Railroad in 1912. Since then, Siberia has grown to house over 25 million citizens. Among the attractions in Siberia are:

Booking Russia Adventure Travel is best aided by a qualified travel agent, who specializes in travel to Eastern Europe. First, be aware that visitors from the United States and Canada will need a valid passport plus a Russian visa stamped in their passport. Make sure to allow plenty of time to have these documents processed. For the application form and other requirements, see the Russian Consulate Web site.