Salem MA is forever linked in the American imagination to the Witch Trials held there in 1692. The village, however, has a much more diverse history. Salem, founded in 1626 and was an important 17th and 18th century shipping center. After shipping's demise, the village became known for its excellent tanneries and show manufacturers. Today, Salem is a residential and tourist center with about 40,000 permanent residents.

Salem was founded in 1629 as a small fishing port. It's name is an English derivation of the Hebrew shalom and the Arabic salam, meaning "peace." The port grew steadily and, by 1790, Salem MA was the sixth largest town in the United States. During the Revolutionary War and the War of 1812, Salem was a major center for privateering.

Salem is also famous at the home of one of America's early authors, Nathaniel Hawthorne. His novels, which include The Scarlet Letter and The House of Seven Gables, were set in and around Salem.

Most of the city's 17th century and 18th century architecture survives today, making it an ideal tourist destination.

The infamous Salem Witch Trials began in 1692 and continued to the end of 1693. The town hysteria led to 20 people being executed as witches and dozens more being imprisioned, many of whom were young girls. Though it was a sad chapter in the town's history, Salem today capitalizes on the witch trials, with the Salem Witch Museum, numerous Halloween events, and a plethora of occult and wiccan shops. 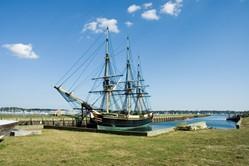 Salem has a wealth of interesting attractions. Among the most popular are:

The Ingesolls were cousins to the American author Nathaniel Hawthorne and his book of the same name was inspired by the multi-level frame house. Today, the house is a museum and gives visitors a glimpse of what life must have been like in the 17th and 18th centuries.

Salem is located just 16 miles north of Boston, along the Atlantic coast. The trip is about 30 minutes by car or commuter train and about one hour by bus. Salem abounds in [Massachusetts Bed and Breakfast|bed and breakfast inns] as well as offering the historic Hawthorn Hotel, located on Salem Common.

The city of Salem comes alive in October with "Haunted Happenings," a citywide Halloween celebration. Activities begin early in October and continue through Halloween. Among the many offerings are theater productions, walking tours, a costume parade, and special events at the Salem Witch Museum.