Brittany, the French province in the extreme northwestern part of the country, is technically a part of France, but in many ways it is a land all of its own. The Breton people, most of whom are descended from the Celtic people, have their own language, their own style of dress, their own religion, their own music, and their own customs. Over four million people live in this historic province today, most in the major cities of Nantes, Rennes, and Brest. The sea has always been important to this peninsular province, bounded on the north by the English Channel and to the south by the Bay of Biscay. Notable residents of the region include the writer Chateaubriand and the explorer Jacques Cartier.

Brittany's history dates back to the Epi-Palaeolithic Period in the 5th millennium BC. Megaliths from this period still stand in the province, mostly near the town of Carnac. During the height of the Roman Empire,this area was a part of Rome, as was most of Britain. It was during this time that British tribes from across the English Channel settled in Brittany. This immigration increased after the fall of the Roman Empire. Brittany takes her name (literally, Little Britain)from these early settlers as well as her Breton language, a derivation of Welsh and Cornish. It was not until 1488 that the French defeated the last Breton duke and Brittany became part of France.

To this day, Breton culture derives as much or more from Celtic customs as it does from the French. Breton is spoken by most residents of Brittany and road signs and store marquees in the province carry both languages. Traditional Breton music, a lyric folk music that incorporates the Celtic harp, is heard throughout Brittany. Popular summer festivals, called fest noz, are held throughout Brittany, and celebrate the region's music and culture. The oldest of these is the Festivale de Cornouaille, held in Quimper. Traditional Breton dress is still sported by many of the elder Bretons. It is common to see the white lace coiffes headdresses worn by women of the region. 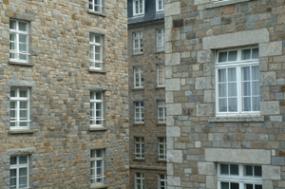 The sea is never far away in Brittany. Some of the most picturesque vistas in the province are of small harbors and seaside villages.Saint Malo - St Malo, on the north shore of the province, is a popular tourist destination. It has also been an important port city since the Middle Ages. The most visited attraction here is the old walled city. Most of the stone 17th and 18th century buildings here were destroyed by German bombing during World War II, but have been carefully restored to their former beauty. Other attractions in the city include the massive Chateau de Saint Malo, the postmodern aquarium, and the tomb of writer Chateaubriand on the harbor island of Grand Be.

The Monoliths at Carnac - Carnac, on the province's southern coast, is best known for its over 3000 prehistoric monoliths - freestanding stone sculptures. Hewn and erected by the pre-Celtic people, the charming local legend maintains that the perfect rows of stones are Roman legions turned to stone by the Arthurian wizard, Merlin.

Quimper - Quimper is a charming and picturesque town in southwestern Brittany, best known for its faience pottery, which depicts French country life. Other attractions include the Gothic 13th century cathedral of Saint-Corentin, named for the town's first bishop, the old town with its cobblestone streets and charming creperies, and the Beaux Arts Museum, filled with paintings by such Pont-Aven masters as Bernard, Denis, and Maufra.

As in neighboring Normandy, apples are a major crop in Brittany. From these, the Bretons produce A hearty cider as well as an apple brandy, called lambig. The region is also a major French beer-producing region. Fresh seafood and fish are a mainstay in the Breton diet and reflect the Breton long-standing relationship with the sea. Be sure to try the gallettes, thin crepe-like pancakes, stuffed with ham, eggs, and other savory fillings. A dessert highlight is clafoutis, a sweet pudding-like dessert, made with prunes.

Visitors to Brittany can fly into Rennes and Brest from Paris or take the high-speed (TGV) train from Paris to Brest. Accommodations vary from full-service hotels to small bed and breakfast inns. There are also a couple of chateau-style resorts in the province. Generally, accommodations are much less expensive than you will find in Paris or in the south of France. A rental car is recommended for touring the area, as some of the most picturesque sights are outside of the main cities.